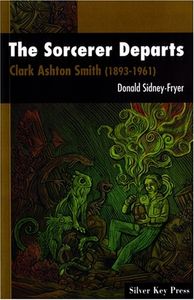 Clark Ashton Smith, best known today for his association with H.P. Lovecraft and the Cthulhu Mythos, stands as one of the most fascinating literary figures of his time. Poet and translator, heir and upholder of the California Romantics, creator of new poetical forms of expression, he was also a major founder of modern fantasy through his notable and original contributions to the pulp magazines of the 1930's. Smith was also a self-taught artist whose paintings, drawings and sculptures reflect the phantasmagoric worlds of his fiction.

The Sorcerer Departs, first published in 1963, is widely considered not only the first but still the best bio-critical essay on the life and works of Clark Ashton Smith. This newly expanded and revised edition of Donald Sidney-Fryer's classic study not only serves as an excellent introduction to the writings of the Bard of Auburn, but will prove indispensable to every serious scholar of his work.