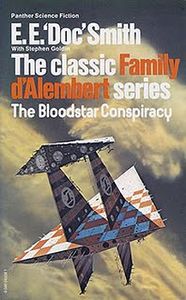 The Stanley dynasty had faced many crises during its rule of the Empire of Earth. But none so dangerous and potentially destructive as the cosmos-spanning conspiracy organized by the mysterious Lady A. Her true identity was unknown, her forces massive yet untraceable and already she had infiltrated the Empire's top security network.

Now, Lady A is planning to seize complete control of the Empire itself. The occasion - the Imperial wedding. The place - Bloodstar Hall. This time even the unique talents of the Family d'Alembert will be stretched to the limit as they race against all odds to stop Lady A and save the galaxy from total chaos...

The Bloodstar Conspiracy is the fifth spectacular space opera saga in the Family d'Alembert series.